It seems strange to me that in the past three months I have stood on four continents – home in Europe, South America for my Argentinian conference, back to Europe, then home to North America, back to Europe, then off to Asia. It’s little wonder life has taken on a rather surreal feel as though I’m walking in a dream.

My trip to Malaysia was the first time I’d been to Asia. As my plane landed in Kuala Lumpur, a grin split my face with the thought that I was now in a place that was brand new to me. Not only a brand new place, but a place where I was totally out of my element with the language and cultural contexts. It felt brilliant.

My friend Mizah is what drew me to Malaysia. Long time readers will remember that she and I were flatmates back when we were both students at Durham University. She and I used to set the world to rights over a cup of tea in our communal kitchen. Perhaps it was real-life foreshadowing but I remember having a conversation with her about Malaysian weddings back then. I found it difficult to imagine a wedding with over a thousand attendees. By the time my trip to Malaysia was over I would no longer have to imagine such a spectacle – I had witnessed it first-hand.

Mizah was getting married. She had met and fallen in love with an incredible kind and patient man named Ling. I was thrilled when I first heard the news. When she asked if I could make the trip to attend I did not hesitate – it was an emphatic yes.

My first impressions of Malaysia were a muddle. There was an excited reunion at the airport when Mizah greeted me at arrivals. I met Ling when we walked out to the car and put my bags in the boot. Then we were driving to her parents’ house in the suburbs of K.L. We chatted and caught up and the Malaysian scenery passed by my window and I tried to drink it all in but between a long day of travelling and the excitement it became a blur.

Little did I realise that the whole week I would spend in Malaysia would feel like a blur. Mizah and Ling were getting married two days after I arrived and it would be a two day affair. First was the nikah – the solemnisation which took place at Mizah’s parents’ house. Then we drove to Ling’s family’s house where they observed some of the Chinese wedding traditions. A nine course banquet followed which included, much to my surprise, karaoke. The next day was the Malay wedding and nearly 2000 guests attended, ate, chatted, and had their photographs taken with the happy couple.

Mizah and Ling truly defined their own path. Though they are both Malaysian, they come from different cultural backgrounds – Malay and Chinese. For the wedding celebrations, they combined elements of both traditions and made their own path through the cultural woods, so to speak. The result was truly something beautiful and special and meaningful.

Mizah and Ling woke traditional Chinese wedding outfits for the nikah. Here Ling is “fetching the bride” where he brings his new wife to his family’s house.

Mizah arranged for all of her friends to have henna for the Malay wedding. 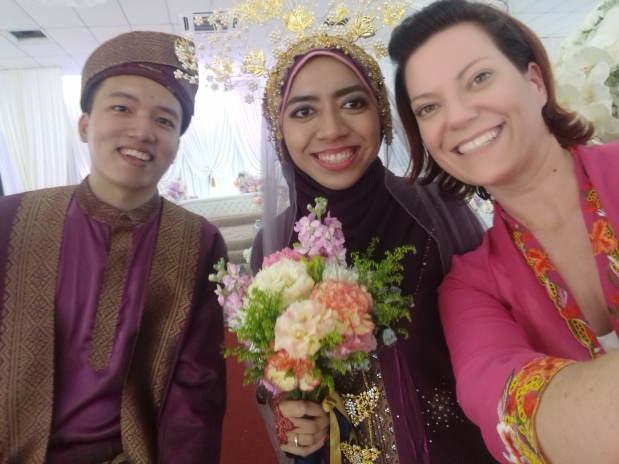 It was a seriously happy occasion.

Usually, the bride and groom would take a honeymoon after their wedding, just like a European couple. Mizah and Ling, ever the trailblazers, opted for something different – a buddymoon. Three of us had travelled from Europe to be with them for their wedding and they had decided to take the week and show us around nearby bits of Malaysia. One thing you should know about Mizah and Ling is that they are probably the most generous people on the planet. I don’t think this is an exaggeration. They were giving us their time and insisting on paying for everything along the way. It seemed that there was always a race to beat Ling to the till in order to pay before he could.

We spent time in KL seeing the classic points of interest as well as a number of malls (they really love malls in Malaysia). We took a day to visit Malacca, a very touristy city but one which overlooks the sea and is full of incredible history from the powerful Malaccan kingdom to the colonisation by the Portuguese, Dutch, and British, to the Baba Nyonya community which saw the union between Malays and Chinese lead to a brand new cultural identity. We also spent some time in Putrajaya the administrative capital of Malaysia. Think Washington D.C. but built in the 1990s.

All along the way we ate amazing food. There were so many dishes I tried I can’t possibly remember them. All I know is that Malaysian food is incredible and I’m going to be looking out for Malaysian restaurants here in the UK as well as combing the Asian supermarkets for things like kaya with pandan.

The truly best part of my week in Malaysia was spending time with someone very dear to me and getting to know the man she chose as her partner through life. On its own Malaysia would have been amazing, spending my time there with such beautiful people turned it into something truly meaningful and special.

Sitting at my computer now and looking out over a chilly British morning, I can still capture the feeling of Malaysia. It is as though I have woken from a beautiful dream and can only capture a vague impression, one that if I try to hard to focus on slips through my mind like water through my fingers. I can catch a bit of the heat and humidity, the smells of incense in the Hindu temple, a (thankfully) faint whiff of durian, the sweet taste of mangosteen. I can see the bright splashes of colours from the batik stalls in the market and faintly hear the call to prayer echoing through the noisy streets of KL. The vibrancy of the place, its multicultural tapestry, and the beauty of deep and lasting friendships are what I will most take away from my dream of Malaysia.