I don’t think I can remember a busier December. There were of course the Decembers when I was thirteen or fourteen and was dancing in the Nutcracker. It seemed like endless afternoons and evenings of rehearsals and weekends full of performances all balanced with school. Then there were the Decembers when I was a full-time music teacher. Preparing the children for their holiday concerts were always stressful. It seemed that I spent every waking moment thinking about the music, rehearsing with the students, designing programmes, and planning the logistics. When I went back to being a full-time student, suddenly, my Decembers – while busy – were just a bit more leisurely. Sure I had deadlines but there wasn’t that stress of everything riding on my shoulders. This December though has been another thing entirely.

The month began in Rosario, Argentina. I was there to deliver a paper at a conference and had decided to spend a few extra days seeing the city and experiencing Argentina. It was only the second time I had been in South America. I had travelled in Brazil about thirteen years ago on a choir tour. This time I was on my own and in a decidedly less touristy city. It’s late spring there right now and temperatures were in the high 70s and 80s. It hardly felt like December 1st when I was wandering around the city in capris and a tank top. I’ll definitely share more about my trip in a podcast in the new year. Suffice it to say, it was the most unusual beginning to a December I think I’ve had. 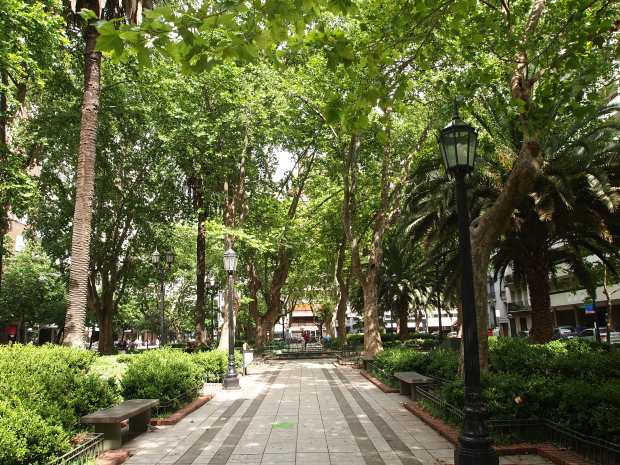 A view of one of the plazas in Rosario around the 1st of December.

I arrived back in Cambridge on the 3rd and was instantly hit with just how cold it has gotten over here. Riding my bike has become that much more challenging as I try to avoid patches of frost or ice. We even had a really good snowfall just a few days ago. It was my first proper UK snow in that it wasn’t just a dusting that was gone in an hour. This was a nice thick snow you could make snowmen and snowballs from.

This was a perfect sight to wake up to on a lazy Sunday morning.

I’ve also had to hit the ground running as it were. Much of November had been about preparing for the conference and my Argentina trip. December began with edits to a book chapter I had been putting off, prepping for a reading group session with MA students in Leicester, podcast recording and editing, and preparing a job application. All the while I’ve been doing the sorts of things you do for the holidays – decorating, gift wrapping, baking. That my days have been so full has actually been quite good. It has kept me from wallowing in the inevitable homesickness and nostalgia which tend to overwhelm me at this time of the year.

I’m conscious of the fact that my last post centred around how difficult it can be to be away from friends and family during the holidays. I don’t want to make it a habit to focus on that aspect of being an immigrant, but it is extremely valid. Around this time of the year, I find it difficult to stop the flood of memories of decorating the tree with my mom, baking Toll House chocolate chip cookies from scratch, watching Rankin-Bass Christmas specials, and hanging out backstage before the curtain rose on our Nutcracker productions. I find I think about being a kid at this time a lot, and how the air almost felt charged with electric excitement when the 1st of December arrived. Those memories and those visceral feelings take on a whole new gravity when you’re 34 years old and living 3,500 miles away from the people you share those memories with.

I’ve now lived in the UK for four years and I’ve spent the last two Christmases in Yorkshire with Jeremy’s family. I’ve been making new memories over that time and making new traditions as well. (For example, Jeremy and I always go into York a few days after Christmas to see the new Star Wars movie (which is great but it does mean I have to avoid spoilers for two weeks!)). I suppose all of us adults do this as we get older. We have to find ways to balance our nostalgia-filled traditions with the realities of being grown-ups and having new and different elements in our lives. I’m certainly not unique in that, but I think what adds an extra layer of melancholy is that distance and the very subtle but real cultural differences between the US and UK. On the other hand, it also means I can pick some of the best parts from both my past and present and weld them together into something really meaningful. Along with that melding also comes the joy of sharing my traditions with Jeremy and I know the past two years have given him a lot of joy at seeing me adapt to his family’s traditions as well – midnight mass, stockings in the morning, Christmas lunch and tomato soup, the Queen’s Christmas broadcast.

One of my favourite things to do at Christmas is re-watch all of my favourite holiday movies – Miracle on 34th Street (the original!), Emmet Otter’s Jug Band Christmas, Muppet Christmas Carol, Scrooge (with Alastair Sim – my dad’s favourite), The Bishop’s Wife, White Christmas, all the Rankin-Bass specials. The other night I introduced Jeremy to Emmet Otter and I loved being able to watch it as though it were for the first time through him. For me, it’s so familiar, but watching him experience the story for the first time was really a treat.

This had been the first year I’ve had a Christmas tree in the UK that I could decorate with ornaments from home. A bit of background: my mom is an avid collector of Hallmark ornaments. She’s been collecting for at least as long as I’ve been alive. Every year when the ornament catalogue comes out, we’d go through and pick out which ones we liked. Then on the morning of their release, we’d wait outside the shop until they opened. We have hundreds of them – more than could ever fit on one tree. This year, my mom packaged up a bunch of my ornaments from home and sent them to me so that I could put them on our tree. I must admit that I teared right up when I opened that parcel. Jeremy and I took an afternoon to hang them up on the tree next to ornaments we’ve gotten here. Everyone holding a specific memory for me and now for Jeremy as well.

I haven’t been able to stop Measles from climbing the tree, so in the end, I’ve just let him perch.

So many of the Hallmark ornaments we have collected over the years speaks to my family’s love of geek culture. We’ve got Star Wars and Star Trek characters and space ships, Peanuts gang, Scooby-Doo, there’s even a Xenomorph on our tree this year. 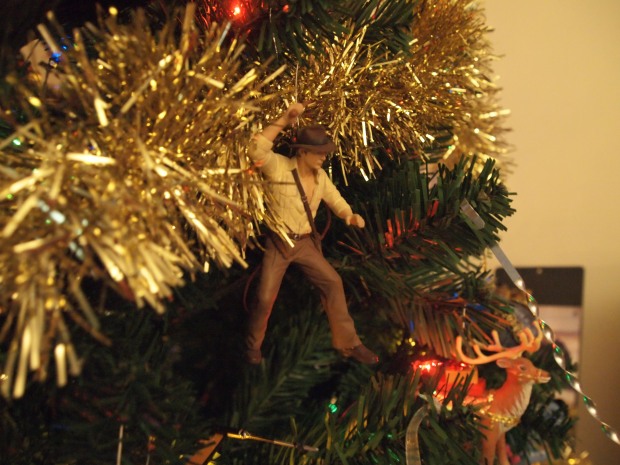 Does anything say Christmas quite like Indiana Jones? Well maybe that reindeer does.

This was an ornament Jeremy got last year. Yes, we even have Ezio on our tree.

Another thing we’ve started this year was to have chocolate advent calendars. If you’ve listened to this month’s podcast, you know that they are a big thing over here in the UK. Jeremy never had one growing up, but we decided it might be a fun thing to do this year as it’s the first December we’ve lived together. Now I must say that because I was in Argentina, Jeremy was in charge of getting the calendars. When I returned he had been very gracious and hadn’t opened any of the doors despite it already being the 3rd of December. He had also only bought one calendar. You read that correctly – one. He had a strange notion that we could alternate days, sharing the chocolates. When I asked other British friends about this they looked shocked and appalled! What?! Share?! In all seriousness though, we ended up getting a second calendar so we could both have a chocolate each morning. I must admit I’m really going to miss having a chocolate treat every morning, it’s terribly civilised when taken with a cup of tea.

I won’t pretend that this mix of new and old traditions doesn’t come without a hefty dose of melancholy. Sentimental parts of films hit me much harder for the feeling of distance in both space and time. I remember as a kid my dad explaining that a lot of people get really sad when they hear the song I’ll Be Home for Christmas. As a kid I couldn’t imagine how anyone could ever be sad about Christmas. Now I find that I’m one of those people for whom that song tugs at my heart-place. Things that I used to smile or laugh about as a kid at this time of the year, still make me smile but often that’s accompanied by the sting of a tear. I cannot imagine how that pain must be amplified for those who cannot return home for whatever reason. I’m lucky in that I’ll be getting on a plane in early January to see my friends and family. If I couldn’t do that, I’m not sure how that would feel.

So, I will be home for Christmas, because I’ve somehow managed to make my home between two countries and two families. Surely, that’s really what this season is all about.

5 thoughts on “I’ll Be Home for Christmas”