Those of you who have been following my Instagram for the past several months know that I have been training for the British 10K. Three times a week, I would lace up my trainers and pound the pavements around Cambridge. There have been ups and downs, runs where I felt amazing and runs where I questioned my sanity at taking on this challenge. This past weekend though, the training came to an end and it was time to put myself to the test.

I will be perfectly honest, I had very little idea what to expect not only of the event but of myself. This would be the third race I had run and the second in London but it was by far the most serious, the largest event, and the longest distance. I had managed to do a 9K run during my training and I had been reassured by my running friends that I’d be absolutely fine to run a full 10K but it remained a daunting prospect.

I got to Waterloo Place a little after 8:00 in the morning and dropped off my bag. I was in the last pen so I had plenty of time to use one of the “luxurious” portaloos, do a bit of stretching, finish my bottle of water, and then walk down The Mall to my starting area. In fact, I had a bit too much time. In my anxiety to make sure I was where I needed to be on time, I overshot by a long way. By the time my group was moving toward the start line, I was actually beginning to feel hungry again despite having eaten breakfast.

The shuffle to the line felt like it took ages. In truth it was probably close to 20 minutes. My legs began to feel a bit tight. Between that and my hunger, I began to feel quite anxious. If this was how I was feeling before I even began running, how would I make it to the end of the race? 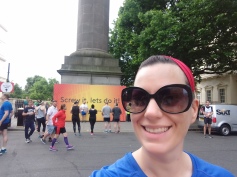 Heading to my Starting Pen 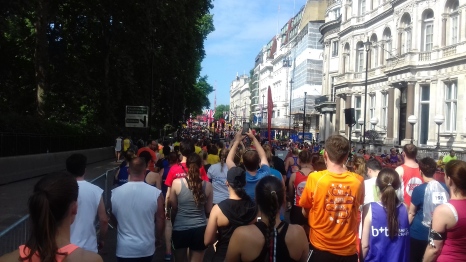 Heading to the Start

Well it IS the British 10K

I finally crossed the start line around 10:00 am. Armed with my Garmin and placed slightly in front of the 1:15:00 pacer, I managed to settle into a good pace that was both comfortable and would keep me on track to finish in my goal time . . . if all went well.

The atmosphere was fantastic. The weather was gorgeous, if a bit hot, the crowds were encouraging, and the other runners around me all contributed to me pushing on throughout the race. Having strangers call out your name and tell you you’re doing great is kind of an amazing thing. Everything felt great until I got to just before the halfway point.

I was passing Trafalgar Square and the first hill loomed before me. Now just to let you know, Cambridge is flat. Very flat. It’s hard to find any sort of hills to train on. Now while the elevation wasn’t huge, it was when you haven’t entirely trained for a not-flat course. I slowed right down. My Garmin showed that that 1K was my slowest. While I had thought that reaching halfway would really bolster me for the rest of the race, I was now beginning to feel quite tired. Folks around me began to walk rather than run and that horrid little voice in my head began to speak to me, You’ve done great up till now, there’s no shame in walking a bit. Look, everyone else is.

I shook that voice from my head and kept plugging away. I had done my best to have the route map more or less in my head. As I turned onto the Embankment, I began to feel the finish line approaching. It was then that the 1:15:00 pacer passed me. He had steadily crept up on my progress and it was now that he caught up. I stayed with him for a bit but then began to drop further behind. My heart sank at that. Then I glanced down at my Garmin and realised I was still on pace for an 1:15:ish finish.

I got to Westminster Bridge and the sun beat down relentlessly. I was 1.5K away from finishing. I got to the turnaround point and then was struck with the incredible view of the Houses of Parliament and Big Ben. If I could have reached my phone in that moment, I would have snapped a photo. It wasn’t the first time I had seen Big Ben of course, but it looked that much more breathtaking after running 8.5K to get there.

I ran past Parliament and desperately looked for the 9K marker. I saw it in the distance just as one of the runners near me called out to a spectator asking how much further. After seeing the marker herself, she began cheering everyone around her on. “Let’s do this! We’ve got this!” she yelled.

That last kilometer was the hardest one. It wasn’t because I had only run 9K until that point, it wasn’t the heat, the fatigue, or anything like that. It was just mentally TOUGH. Gradually, the finish line came into view. I began to push harder, lengthening my stride, squeezing out the last bit of energy I had. It wasn’t a sprint, it was just digging in for that last bit to cross the finish.

Then it was over. I collected my medal and goodie bag and slowly ambled back to Waterloo Place. My legs were feeling jelly-like. I downed the bottle of water I was given and finished off the complimentary banana. I collected my bag and pulled out the large tub of pasta within. I was surrounded by other finishers and what’s more I was a finisher, too. I had done it and I had met my two goals for the day. I had run the entire course and my official time was 1:15:57.

Me with my Medal in front of Trafalgar Square

I didn’t think I could actually do it until I crossed the finish line. Even now a few days on, it feels surreal. I actually ran 10K! I’ve been out for a brief run since then and I feel different. I feel more confident running, more capable. It’s like meeting my goals has given me an extra dose of Oomph. Also, I’ve pre-registered for the 2018 British 10K and registered for a 10K in October. I think I’ve definitely caught the running bug. It’s a bug I’m happy to carry for a while.