If you’ve been following my Instagram, you’ve probably seen that I’m training for the London 10K next month. At least three times a week I can be seen on the streets and trails of Cambridge cruising along at what seems to me to be breakneck pace (though to most of the world is a bit on the slow side) gradually increasing my distance. Last week, I finally broke 9K which feels like an enormous accomplishment. It was even better to celebrate my running progress by participating in the London Color Run this past Sunday.

I had made participating in a Color Run a goal for myself months before I started running. I thought it would be a fun thing to do and a reasonable goal to set. In the end, I actually ran my first 5K race in Leicester over the winter. It was a great feeling having worked up from running a very difficult 2K to being able to run a 5K in roughly 33 minutes. As soon as it was over, I wanted to do it again.

Then I moved and traveled a bit and fell away from running regularly. It wasn’t until I saw the advert for the London 10K that I decided to go ahead and get back on the…not horse…pavement! I also decided to look up the Color Run and found that the nearest one was in London a month before the 10K. It seemed like a perfect way to get ready for my big race: run half the distance in a super fun setting. I wasn’t wrong.

Luckily I didn’t have to wake up too early to make it to London. The run wasn’t until three in the afternoon and it would only take a few hours by train to get there. Shortly after noon, I hopped on the slow train to London Kings Cross. I was already in my crisp white Color Run t-shirt and running shorts. There was no bag drop so I was travelling rather lightly, just myself and a small bag with a book, a change of clothes, and my bib.

It was a gorgeous day for the run. The sun was out, the sky was blue, and it wasn’t too hot. The only thing I would have changed were the mild gusts of wind that could take you unexpectedly as you rounded corners on the course.

I arrived at Kings Cross and headed to the Metropolitan Line. The run was being held at Wembley Stadium which was pretty far out of central London. As the tube made it’s way ever closer, the carriage began to fill up with Color Runners. We were all wearing the same shirts, some had glitter and face paint, some wore their head bands on their wrists, some wore wigs, but all of us were headed to the same place to do the same thing. It was kind of awesome really. 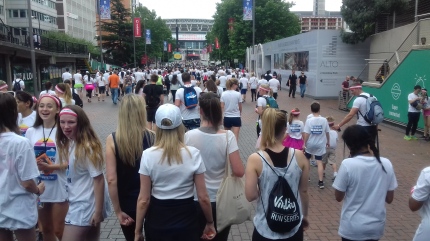 I had no trouble finding where to go. All I had to do was follow the hordes of white-shirted runners. I made my way the small distance to the stadium and joined the throng of people waiting for the run to start.

I made my way close to the Start and stood in the crowd listening to the music pumping everyone up. Everywhere, folks were standing in groups are pairs. I felt a pang of regret for not running this with some friends. It probably would have been even more fun. Then I heard the sound of drumming. It was coming from a Batala group and they were leading us to the official start of the race.

I was in the third wave to leave and as I began to run, I relaxed. I had been feeling nervous and unsure of myself but now I could settle into my pace and just have fun. I was timing my run with my Garmin but I wasn’t trying for a PB, I just wanted to make sure I had it recorded for my training notes. (I’m becoming a running nerd).

It wasn’t too long before I got to my first color zone – green. The cloud of colour rose off in the distance and as soon as I went under the archway, I got powdered color thrown at me. My shirt was no longer a pristine white. It was pretty awesome. Next was pink. I got a tonne of color thrown on me there. They really went to town. I couldn’t believe how fast the colors were coming. I felt like I’d only been running for five minutes and yet I had already gone through two zones. Next was the foam zone which I avoided. I had to get back on a train and I didn’t want to be soaking wet when I did. Then came orange and finally red. Then – it was done; I crossed the finish line, picked up my bottle of water and a packet of colour.

I found a spot on the pavement and sat down for a stretch. I was covered in colour and I felt really happy. I had accomplished a goal I had set for myself and had had a really fun time along the way. I finished my water and headed back for the tube station. I didn’t even mind being covered in colourful powder on my way home. It was sort of like a badge of honour but much more fun. I got home a little after Jeremy. With his help, I managed my last dousing of colour in our garden with the packet I had gotten at the end of the race.