I had so much fun making this month’s episode of You Say Toma(h)to. Stitching together the audio we had recorded all over Paris into a narrative helped me to relive our holiday and make it come alive in a way that a simple blog post never could.

As I reflect more on our holiday and the process of turning into an audio book format, I can’t help but think about certain things I left out. It’s impossible to include everything and while I think the podcast covers everything we did, there were certain impressions of the city that stand out to me as I type this.

Perhaps one of the most poignant moments came very early in our trip. It was our first day. We had only been in Paris a few hours and had decided to walk around Montmartre and the area around Sacré-Cœur in particular. We strolled down the Rue Lamark and came across the Centre israélite de Montmartre. We noticed a plaque on the wall which we managed to translate between the two of us: 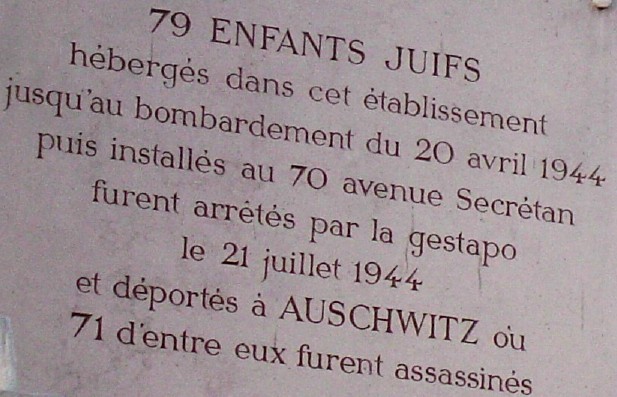 Seventy-nine Jewish children housed in this establishment until the bombing of 20 April 1944 and then installed at 70 Avenue Secrétan were arrested by the gestapo on 21 July 1944 and deported to Auschwitz where seventy-one were murdered.

All around the city of Paris you find plaques like this one. Many are about resistance fighters who were murdered by the Nazis, some are about triumphs by the resistance, and then others are like this one; visceral reminders that this city was occupied and experienced heartbreaking tragedies.

Seeing these plaques triggered a memory for me. I had only been in the UK for perhaps a month when one of my British friends casually mentioned something about her grandmother living through the bombings during World War II. Of course I had known about the Blitz and had read and seen a great deal on it, but suddenly, it really struck home that the UK had had a very different war from the US. While my grandmother had told me about rationing and my grandfather being called up, she had never experienced bombings.

When I stood, looking at plaques about occupied Paris, I had a similar feeling. France had had a very different war even from the UK. It seems so obvious when I type this. Of course different people in different places experienced the same phenomenon differently. But there is something about talking to people, seeing the real places, being within the environment first-hand that brings that realisation to an empathetic level of understanding. I viewed Paris through a different set of eyes each time we came across a memorial. Plaques over storefronts caused the modern city to melt away before my eyes and I could imagine scenes of wartime Paris.

Another aspect of the city which I didn’t really mention in the podcast was the omnipresent armed security. Paris has known recent tragedies as well as those of the past. I can’t say it surprised me to see armed security around the city but the number of officers sort of did. Of course as tourists we were going to locations that could be considered likely targets, so that probably goes a long way to explaining why we saw so many. As an American, I’m slightly more used to seeing armed police and very occasionally armed National Guard officers in certain areas, but every time I do, even back home, I tense up a little. It’s not out of a guilty conscience I assure you. It’s out of a  that’s-a-big-gun-that’s-sole-purpose-is-to-kill-or-maim-humans-and-that’s-kind-of-scary feeling. It’s monkey-brain responding to potential threats to life and limb.

I cannot begrudge Paris for it’s heightened and very visible security. I get it. It just left a bit of an impression on me.

I was also lucky enough to interview my friend Laurie for this month’s podcast. I am always grateful for my friends for being so supportive of my projects. I’ve known Laurie since we were nine so it was really a treat to talk to her about her experiences in Germany. We’ve talked before about how different my experience abroad is to hers. Living far from home pre-Facebook, pre-Skype, pre-Smart Phone was challenging. I’m not sure I could have done it. What I love about getting to interview my friends is that I always learn something new about them and I always learn from them.

Word of the Month was really fun for us this month especially because it was cat-themed. We recorded it prior to going away but it sort of fit in really well considering we took Measles our Cardboard Cat with us. He had a great time. If you don’t believe me, check out my Instagram.

Our next episode will be out a bit later than usual on Tuesday, 9 May. Be sure to tune in and share it widely!