The continuation of Jeremy’s adventures in America includes a visit to the City of Brotherly Love, a trip to the movie theatre (what he charmingly refers to as “the cinema”), and some gorgeous views of Longwood Gardens.

Americans know how to do breakfast.  On Saturday morning, Kirsten cooked a mountain of pumpkin pancakes with butter, maple syrup and bacon.  After a long, gentle morning of slouching and ponies (endless ponies), we set off for the train station.

Our destination was Philadelphia.  Jen and I have recently watched the HBO series John Adams, so I’ve boned up on my American revolutionary history.  I was interested to see the city at the political heart of those events.  We proceeded to a very interesting museum, for its contemporary relevance as much as its content: the National Constitution Centre.

First on the list of painful things: a temporary exhibition about the history of presidential campaigning.  We didn’t have time to visit.  I wondered whether the exhibition covered the horror that is modern campaigning, of which the 2016 edition was the most depressing.

Second: Trump’s face on the wall of Presidents on the windows.

Third, and the worst: Trump stuff in the Centre’s shop.  Not steaks or any of his own branded manure, but dolls and, heaven forbid, a kids book about him.  It was horrifying and repulsive, not only for the man’s politics, but for its treatment of the president as a kind of hero for kids to learn about.  Don’t do that with politicians at the top who must inevitably compromise and disappoint, and particularly when they haven’t even started the job.  Do it for scientists and engineers and, yes, sports men and women who truly excel.

The permanent exhibitions were actually very good.  The Centre seems like exactly the sort of place that millions of Americans sorely need to visit, in order to gain a critical perspective on the past.  Sadly, those people are the ones least likely to least care about museum visits.  How does a liberal society talk to those at the bottom?  It’s a huge question with tremendous implications.

We sadly ran out of time before we could go to Independence Hall – one for another visit.

The evening of that day was terrific, a real highlight of the trip.  We went to see Greg and Amy, two more of Jen’s friends, for dinner and drinks with the two of them and Dan, and Kirsten.  They were such good hosts – endlessly chatty and informed, always refilling glasses, and Greg was even dishing out cocktails.  I’ve rarely met a more gregarious couple.

As this trip goes on, I felt myself becoming more of a social creature. 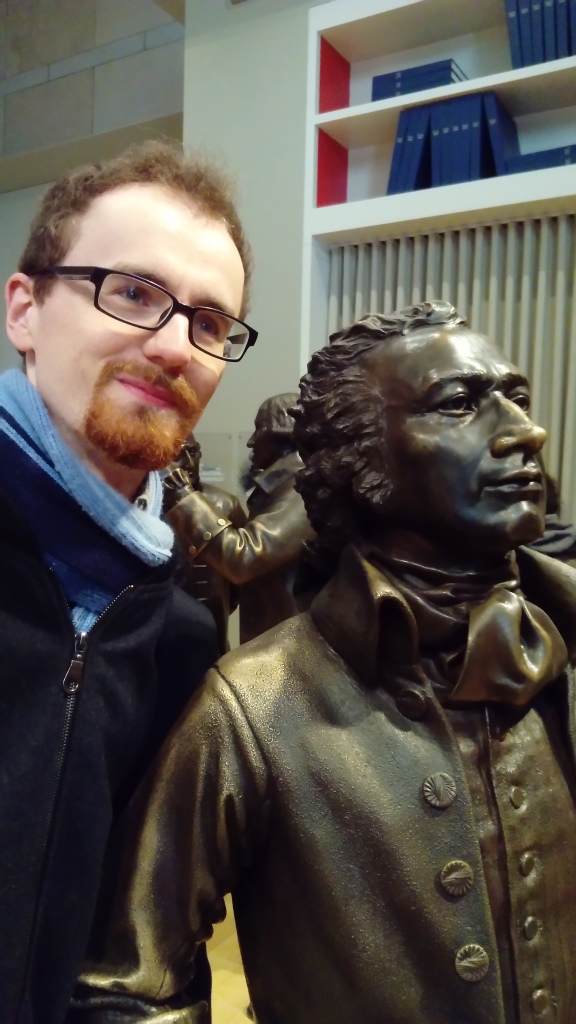 Me posing with Alexander Hamilton at the National Constitution Center

Sunday was in the diary as a rest day.  We sorely needed it and spent much of the morning slouched on the couch.

In the afternoon we managed to drag ourselves to the cinema to see Fantastic Beasts.  There I experienced a long-awaited aspect of American culture: buttered popcorn.  When we first went to the cinema together in the UK, Jen had wondered where the butter dispenser was.  I replied with a comically disgusted face and it became a long-running joke.  After finally having had ‘budder’, I can confirm that it looks rank, smells weird and tastes meh.  I wouldn’t have missed it for the world.

When we returned home, Jimmy, Shannon, and their two daughters were around and pizza was on its way.  After eating, we played Ticket to Ride, the railway-based boardgame.  I had played the European version twice and had won twice (once tied with Jen).  On the American map I was enjoyably trounced and came last of five.

On Monday we were expected at the New Jersey State Museum in Trenton, just down the road from Jen’s place.  She interned there once and made a close friend of another Jen on staff there.  The museum is normally closed on Mondays but we were able to have a quick peek at some of the new exhibitions.  I enjoyed it very much, particularly the art and the social history section.

We said our too-soon goodbye after lunch and walked to our next stop, the Old Barracks.  This was a rare treat for me, a chance to indulge my love of military history in a new setting.  For once, the Brits were not the ones on the winning side.  The barracks was built during the French and Indian War, as we were told by our uniformed guide.  Later, in 1776-7, Washington won two important victories over British and British-allied forces (Hessians) at Trenton before proceeding to Princeton for a third victory.  I was impressed by the lack of jingoism in the museum – our guide told us about living standards and medical practice of the time far more than the American victories.

This even-handed treatment of national character was in contrast to one aspect of US culture I’d noticed.  The flag is everywhere: on trains, houses and ads, on public buildings, above sports fields, flying over freeways.  The prevalence of the stars and stripes struck me as overtly nationalistic rather than benignly patriotic.  It has become a comfort blanket instead of a statement of values.  I have often heard the argument that the flag is becoming a sacred symbol an increasingly dogmatic civil religion.  I’m inclined to agree.  Having it outside a home or in a military base is one thing.  Making children pledge allegiance to it is another. 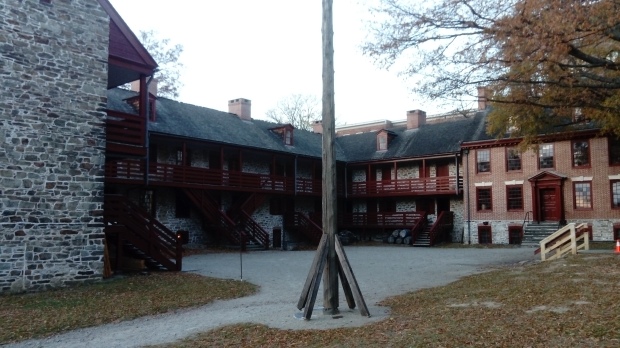 The Old Barracks in Trenton

We had been blessed with dry, if chilly weather for our trip thus far.  On Tuesday it chucked it down.  Naturally this was the day we’d scheduled to go to Longwood Gardens, which I’d assumed would be a largely out-of-doors experience.

We drove into Pennsylvania to meet Laurie, one of Jen’s oldest school friends, who was joining us for the day.  With her was her four-month-old son.  Laurie drove us through the driving rain to the gardens.  I couldn’t hear a word of the conversation as the rain was too loud.  The lack of cats’ eyes on the major roads unnerved me a little.  When I was told we were in Philadelphia, I could hardly see the skyline for the gloom.

After an hour and a half we arrived.  I was surprised that we had left Laurie’s house at all, but was assured that the conservatory would occupy us easily.  We dashed to the entrance building and up through the grounds to the restaurant for lunch.

It was dark, around 4pm or so, by the time we returned to the conservatory.  If anything the darkness made it more beautiful.  For the Christmas season the various gardens, orangeries and palatial central chambers were lit with thousands of golden lights, and Christmas trees, wreaths and ribbons brought festivity to every room.  Whilst there was some historical and botanical information for visitors, the gardens felt more like a winter wonderland than, say, an English landscape garden would have done.  That felt right, proper, and very American.

After splurging in the shop on Christmas presents, we returned to the car.  When we got back to Laurie’s, we met her husband Lloyd.  We also met a dark house – the torrential rain had caused a power cut.  My first meeting with Lloyd was therefore a lot more gothic than I’d expected, all candlelit with glints in our eyes.

After the familiar but always heartfelt goodbye, Jen and I drove home.  Our holiday was almost done.  Only a day of packing and flying remained.

Me at Longwood Gardens

Our final day in the USA saw more rain.  I call it pathetic fallacy.

We began by visiting a storage unit.  We were searching for things we could take to furnish our new flat.  We came away with a few chips off the mountain of bygones: some bathroom items and a pair of opera posters for our wall.

We dispatched my postcards at the post office, moved to Target for some bits-and-pieces purchases, and went back to the house.  Even my lunch held memories – I finished off Jen’s mum’s chicken cordon bleu from the Stagecoach Inn, kept in the freezer for a week.  It brought back thoughts of good friendship and bad stomachs.

We could delay no longer and began packing.  If memories were physical, I’d be spending a fortune on extra luggage.

Our flight was at 9:30pm, and after packing we whiled away the time with Star Trek: The Next Generation on BBC America and Jen’s dad’s delicious homemade chocolate chip ice cream milkshakes.  I vowed that they would be my last sugary indulgence for a good while.  It’ll make them taste all the sweeter when I come back.

We left bang on time at 6pm.  After another tricky drive through the rain on the dark highway, we arrived at Liberty International.  I was touched by the kind words of Jen’s parents.  I will miss them both and look forward to my return.

Time and feelings slip and slide at airports, particularly when returning from travels.  I don’t quite know what I felt, sat in the departure lounge.  My mind had switched on its coping mechanisms, detaching emotion from thought.  It’s useful to become a robot every now and then.

Jen and I helped one another out a great deal over the next fourteen or so hours.  Despite my initial happiness with our premium economy seats and the dinner service, I slept very badly on the flight.  I managed a diary entry, the film Ratatouille, and a turbulent hour or so of dozing.  All too soon it was morning over Ireland, then Wales, then England.  We staggered to our bus, slept gawpingly along the motorway, and emerged in Cambridge two and a half hours later.  We were home, and far from it, after what had been a joyous, and I hope transformative trip.

Me, Chase, and Jen

There are a few thoughts that I had to wrap up before closing my account of our holiday.

When I began this diary, so soon after the turmoil of the presidential election, I had thought that politics would be the most prominent topic.  It’s the reason I started, but I will be forever glad that it’s not the reason I carried on.  There has been too much life and vibrancy to get caught up in misery.  When Trump and associated rage fuel came up, which it did frequently, I saw grief and despair, but also fury and passion in equal measure.  The holiday never felt like a getaway, an exodus from the real world.  It was very real, full of lively discussion on the dangerous and difficult topics of our dangerous, difficult age.  That’s one of the things that made it so wonderful.  I saw friendship, love and compassion abound even whilst we all recognised the great problems of our time.  The people I’d met were more than candles in the dark – they were bonfires.

I have also met at least one Trump voter.  They are there, in a near-separate world from mine.  That separation between voters must diminish, in the UK and US.  The left-behind must be brought up, leaving the minority of racists, bigots and cruel people behind.

Thank goodness, though, that there was so much more to the trip than politics.  It helped me think about what I want to get out of the next few years, maybe the next decade, maybe more.  I want to enjoy the sort of life we led for those ten days, which I will never forget, for years to come.