July 27, 2014June 8, 2017
If you must travel in Europe, travel by train. The rush of fields, trees, and towns past the window is better than any film in a theatre. Each is a mental snapshot. The family who just pulled up in front of their house from a shopping trip, the sheep grazing in a field, the home next to the reservoir where life is slow and the nights quiet. They are all scenes in a story, a story of which I will only ever see one second. One brief moment and then it’s gone. If you must travel in Europe, travel by train.
My trip from Copenhagen to Hamburg was filled with surprises. At the last station in Denmark a rather lengthy announcement was made. We would be boarding the ferry and everyone needed to disembark the train while we crossed. I had never thought about how we would get from Denmark to Germany. It had never occurred to me that the train would be placed in the hold of a ferry and we would spend forty minutes crossing the Baltic Sea from Rodbyhavn to Puttgarden.
The crossing was surreal. I exited the train and looked down the long length of it, placed within the hold like a toy. I climbed several flights of stairs and found myself in a busy, floating market. There were restaurants, shops, and currency exchanges. I found a seat near the bow so I could look out the giant picture windows. The sea was choppy and the boat heaved back and forth sometimes catching the waves just right so that a magnificent jet of white water slammed against the window. I sat there for almost the entire crossing, mesmerised by the amazing surprises I had already experienced on this trip.
It was only a short walk from Hamburg Bahnhof to my hotel in St. Georg, a colourful neighbourhood described by some of the guidebooks as “bohemian.” There were so many different kinds of people; it was a fantastic introduction to one of Germany’s most interesting cities. I checked into the hotel and within an hour I was back out into the mix of Hamburg with barely a plan of where I wanted to go and what I wanted to see.
I walked from St. Georg to the Rathaus and it became obvious that Hamburg was a different flavour of city from Copenhagen. It was busier, noisier, with taller, more cramped buildings. There were many homeless people sleeping where they could find a spot and there was rubbish littered about. I wondered if the latter was due to the previous night’s victory celebrations over the World Cup but the former seemed to be a fixed feature of the city. Many of the homeless I saw had made semi-permanent make shift shelters and beds with piles of their possessions. I wondered why so many were living so rough and I felt pangs of guilt for not being able to help or even understanding what had brought them to that state. No one chooses homelessness and again, I wondered what stories were hiding under the soiled sheets and under the sodden mattresses.
The Rathaus is a gorgeous old building with a beautiful fountain in the central courtyard. I was exploring the city without the benefit of a guidebook and so I knew very little of the history of the sites I was seeing. I went where my feet carried me and where the skyline drew me. I headed towards Michaeliskirche where I knew I would be able to get a bird’s eye view of the city. 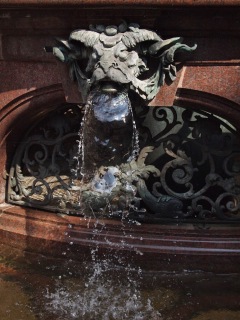 The neighbourhood near the church was much quieter than the rest of Hamburg had been thus far. Lazy cafes and a park where children played with Frisbees stood beneath its tower. The church is well-worth the €6 entry free. I began in the crypt where a presentation of the history of the church was spelled out in German. Mine was rusty but I was able to piece together enough from the photographs and the text panels. I was especially excited to see the burial place of C.P.E. Bach before I began my climb from the crypt to the top of the tower.

Standing out at the very top, the wind whipped my hair violently. Once again I found that my favourite place in the city was on top of it. The views were incredible and looked out on the Norderelbe and the Auẞenalster. I took my time looking out at every side and at every viewpoint. 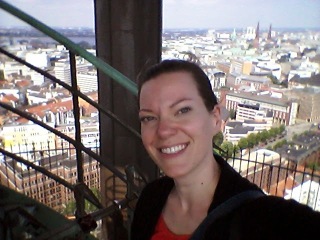 Eventually I joined the rest of the city and walked along the waterfront to Landings Brücken. I turned north and quite by accident, stumbled across the enormous statue of Bismark. The base was covered in colourful graffiti and the small park in which it stood was lonely and felt slightly abused or at the very least care worn.
My stomach led me back towards the Rathaus. I found a restaurant right on the Kleine Alster where I ordered my first meal in German.
“Ich möchte Hamburg Pannfisch und ein Glas Riesling, bitte.”
The waitress smiled and took my menu and left with the unmatched view of the Rathaus across the canal. Again I had that feeling of wanting to be nowhere else at no time else. The evening light played against the cream face of the town hall and twinkled on the water. It was so close to a perfect moment.
I ate my amazing meal and ordered an Apfel Strudel for dessert. I had never had apple strudel before that day. Well I thought I had, but I was incredibly wrong. I have a feeling I will have to wait until the next time I am in Germany to have it again.
I strolled back to my hotel where I spent the rest of the evening trying to relax. I would be on a train again within a few hours on my way to Amsterdam. I regretted not planning a longer stay in Germany. I enjoyed practicing the language and I knew I had barely touched the surface of what Hamburg had to offer. The next morning I ate breakfast in the hotel before packing and heading to the station. The week was flying by and I was desperate to hold onto every single moment.