March 23, 2014June 8, 2017
If you cast your memories back to September (or use the search option on the side of this page), you may recall my first meeting with my course director, Robin Skeates. (Insert flashback fade here.)
I got to chatting with the American guy who had watched our things. He was from Indiana and arrived on Wednesday. He was also in our college, but I had not seen him before today. The three of us sat talking until a blonde haired man with a goatee entered the room. He smiled kindly and looked at all of us. This was our course director, Robin Skeates. In that moment he reminded me rather of Professor Lupin, kind, soft spoken, but at the same time very sharp.
He spoke to us about the Museum and Artefacts program. He talked about our Easter break work placements, our research papers, and our timetables. Then one by one, we went up to meet with him and go over our course selections.
(Incidentally “the American guy” would turn out to be Alex, one of my closest friends here.)
Over the course of the last six months, Robin has managed to endear himself to everyone in the programme. My initial comparison to Professor Lupin was not only shared by everyone but had arisen independently of my observation. It didn’t help that on occasion (oddly timed with the full moon), Robin would miss meetings. It was when he came in with a gash on his nose however, that we all knew he had had a rough transformation the night before. This further spawned an entire Harry Potter alternate universe in which everyone involved in our programme had been assigned a character, professors and students alike. (Yours truly came out as Hermione Granger.) I think it has been Robin’s genuine desire to help us all succeed that has generated this affection in all of us. Whatever complaint, problem, or question one of us might have, he is willing to hear us out and come to some sort of solution. It may also have something to do with his absent-minded academic type persona. How can you not appreciate someone who, in the middle of a lecture, glances out the window and says “SQUIRREL” or someone who puts the strangest pictures on his lecture slides and then can’t recall why he did it?
It was about two weeks ago that we all came to the realisation that our last lecture with Robin was going to be on Wednesday 19 March. Instant depression set in on all of us. No more Robin. No more silly stories. No more odd comparisons. No more squirrels. I’m not entirely sure how the idea arose. I think a number of us came to it simultaneously. We decided to throw a farewell breakfast to celebrate making it through two terms, to give us a proper send off on our placements, but mostly to thank Robin.
Preparations began in earnest. Nearly everyone volunteered to bring something, food, drinks, balloons, cups, plates. There was even a suggestion that we all dress as our favourite museum, though the logistics of which proved more difficult. We were all so excited about how Robin would react. The night before I was busy concocting a French Toast Casserole. It required some creative jiggering as it was an American recipe and for some reason they do insist on using the metric system over here and maple syrup was scarce. I woke early the next morning to pop it in the oven and headed over to the classroom to help set up.
Gemma and Lauren were already there, blowing up balloons and moving tables. I set the casserole down and began to help. Alex came in next with some fruit selections and then came Kate with juice and tiffin. Every time we heard the door open we jumped, terrified that Robin would arrive early and ruin the surprise. One by one we all trickled in. Finally, once enough balloons were taped and the food was all laid out, we took out seats and waited. 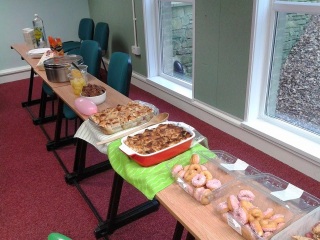 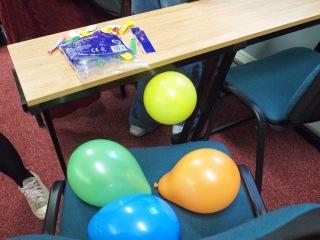 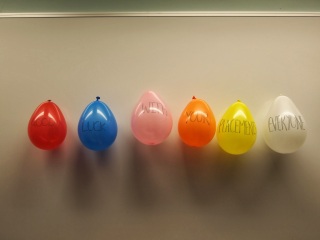 Robin was usually there at half past eight. It was just going quarter to and he still hadn’t come. Then the suppositions began.
What if class was cancelled?
What if Ben (our other lecturer) got jealous and decided to tell Robin that we all hated him and weren’t coming today?
What if Robin got Ebola and is bleeding out of his eyes?
The door opened and in walked Robin.
The reaction was better than we had all hoped. He was truly surprised and touched. He just kept looking around at everything saying things like “wow” and “this is great.” 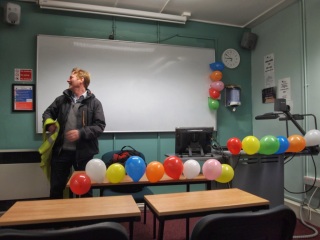 We had the first half of our lecture and then dove into the food. It was a brilliant end to term and a fantastic farewell to Robin. He wasn’t going anywhere just yet and we were sure to see him throughout the spring and summer, but it was the perfect way to say thank you. 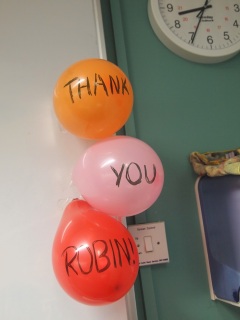