January 11, 2014June 8, 2017
Day 2: The Natural History Museum and NYE on the Thames
New Year’s Eve. So much pressure is put on holidays like New Year’s Eve. You have to do something. You have to celebrate and ring in the new year and celebrate the fact that the planet orbited the sun another time. Being in London, the pressure was doubled. I was in one of the most amazing cities in the world, on New Year’s Eve, and I needed to do something. I couldn’t just sit in my, rather depressing hotel room. I scrambled to find an event and succeeded. I bought a ticket the night before to a New Year’s Eve Ball to be held at the London Film Museum right next to the London Eye. I would be able to watch the fireworks from the second story. Something I was sure I would never forget.
Only one problem: I had nothing to wear to a party which insisted on its guests arriving in “glamorous” outfits. I woke early and grabbed the tube to Oxford Circus. In record time, I had put together an outfit and was headed back to the station.
I had made plans to meet up with a friend from uni. Sara was a native Londoner and she had provided me with a list of places to see and try. Luckily she was in town for New Year’s and we were able to meet up to explore the Natural History Museum.
I cannot do justice to the magnificence of the building. It is one of the most amazing pieces of architecture I have seen. It is an artefact in itself as well as a teaching tool. The carvings of various animals and plant life and the botanical ceiling completely encase you in knowledge. Everywhere you look there are amazing details. You could spend the afternoon simply looking at the building.
We wandered through the exhibits and queued up to see the dinosaurs. Definitely go see the dinosaurs! The exhibit is scientific while simultaneously being artistic. The skeletons are lit in such a way to cast brilliant shadows on the walls behind. You begin to look at the bones not just as the structure of a long dead animal but as living, dynamic, memories. Your imagination takes over and the intrinsic aesthetic value of the bones themselves becomes important. 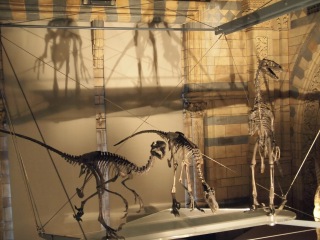 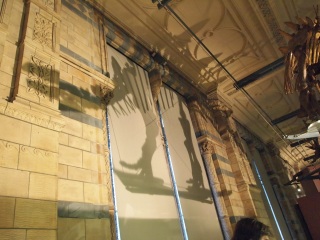 After the Museum I wished Sara a happy new year and headed back to my hotel for a quick nap and to get ready for the party. I needed to get to the museum by six before the police closed down the area. People had been arriving since noon to get the best spot for viewing the fireworks and as the area got full, the police were closing the entrances. Tube stations were shut down or only allowing you to exit. In short, it was going to be a long night.
I exited the Waterloo Station and walked towards the waterfront. Peeking from behind the buildings, I caught my first glimpse of the London Eye. It was magnificently tall and striking against the night sky. 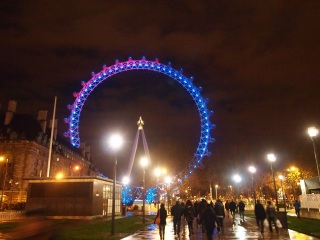 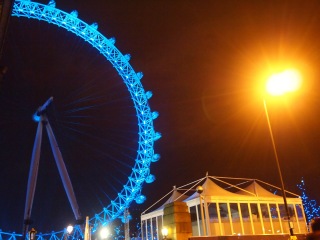 I managed to find the museum and soon I was staring out one of the windows at Parliament and Big Ben. 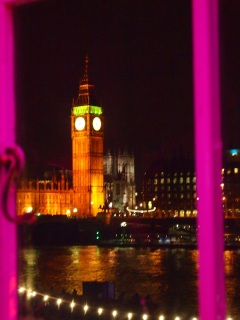 After I explored as much of the museum as was open, and wandered around all the rooms, I found myself completely bored. Everyone was in groups or couples and no one was dancing. I went to the loo (and used my first pull chain toilet) where I overheard a group of girls talking.
“It’s like a bad wedding isn’t it?” One of them said and was received by a round of laughter. She wasn’t wrong.
I managed to be one of the first people to get dinner just by happenstance. I was standing looking at some all clapboards from past films when the queue began to form. Little did I know how lucky I was to be there at the moment; there were people who still hadn’t gotten their food at midnight.
Five hours in and I was going mad with boredom. A middle aged couple had taken pity on me at one point and struck up a conversation. They were lovely. Emma and Iain from Bristol had come to London with their kids for New Year’s. We spoke for about ten minutes and then they wandered off to try to battle for food. I was left alone again and I hoped that the fireworks would make it all worth it. I grabbed my coat from the coat check so I could disappear as soon as they were over and planted myself in front of one of the windows. Soon the countdown began and the fireworks lit up the entire sky. It was perfect. With each explosion the room lit up with applause and cheers of approval. They went on for what seemed like an hour. Then came the finale. It was so bright that the room was filled with what appeared to be daylight. The room erupted in cheers and the music began playing again. I smiled and began weaving my way through kissing couples and hugging friends. 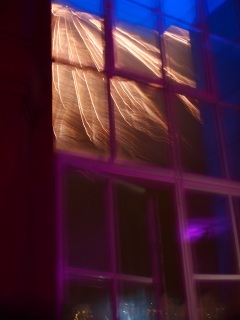 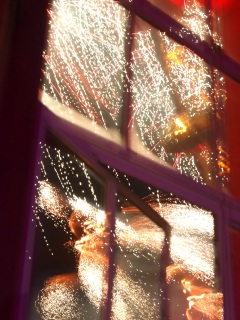 When I made it out onto the street, I joined the river of humanity heading back to Waterloo Station. Thousands of people streamed through the streets of London. Drunks were being upheld by their friends and some were pushing to try to get ahead. Most were content just to take their time and take it all in. A particularly intoxicated girl being braced by her two friends waved at me.
“Happy 2014!” she slurred smiling happily.
“Same to you,” I replied smiling in return.
“I’m so sorry,” her friend said to me.
I shook my head, “No need to apologise, she’s having a good time.”
It took an hour to reach the station that had been only a two minute walk six hours earlier. Thirty minutes later I was unlocking the door to my room and collapsing on the bed. 2014. A new year, with no mistakes, regrets, or disappointments. I smiled and drifted off to sleep.
Advice and Notes: Go see the Natural History Museum. It is completely worth it and you’ll have a blast. Say hi to the dinosaurs for me while you are there. If you don’t mind a long wait, huge crowds, and drunk people the London NYE Fireworks are a once in a lifetime experience. It’s not for everyone and you will always get some of the best views from your television screen.