December 31, 2013June 8, 2017
5:30am. The sound of trickling water and bird song filled my room. I rolled over in my narrow cot-like bed and reached out for my phone. I had been grateful to find an alarm which rather than wrenching one out of sleep, gently encouraged active participation in the upcoming day. This morning, however, I was feeling more exhausted than was normal. Term was over and I had no need for pulling all-nighters, and yet I hadn’t gotten to sleep until past midnight. I needed to get up. I needed to finish packing and begin my hour’s walk to the train station. In a little over eight hours I would be met in Windsor by a very dear friend of mine I hadn’t seen in months. Seeing her and her family marked the true beginning on my break. The trickling continued and the birds sang even more earnestly as I found the snooze button.
The weight of the previous few days had pressed so heavily on me that I hadn’t had the strength to begin packing for my journey until nine or ten the evening before. Monday evening had presented me with the most severe panic attack I had ever experienced. The terror it had brought on and the exhaustion had deepened my depression further than I thought was possible. Abject and complete loneliness had given way to despair and feelings of worthlessness. I sighed and tried to make out the ceiling of my room in the pitch black.
I would be with friends in less than half a day, I told myself.
The water began trickling and once more the chirping of birds filled my room. I reached back to my phone and shut off the alarm. It was time to start.
The hour long walk to the station was the worst part of the six hour trip. My bag weighed just under 50 pounds and I had to drag it up and down the hills of Durham and over the uneven cobblestones. To add insult to injury it began to rain halfway through my walk. Durham Rail Station sits on top of a hill north of the city centre. I stood at the bottom of steep and enormous set of stairs leading up to the station. I began to pull my bag up, getting more soaked, more exhausted, and feeling more alone with every stair. Eventually, I had made it halfway up when a young man appeared and asked if I needed help. After thanking him nearly five hundred eighty-two times, I made it to the train and was finally on my way.
I got into King’s Cross and headed toward the entrance to the Underground. I was an old hand at the tube and arrived at Paddington fifteen minutes or so later. I sat and waited for my next train which would take me out to Windsor. I could have gotten on one of twenty trains that were departing over the next hour I sat staring at the boards but I had said I would be on the 12:37 and that was the train I would take. As I sat, I watched the pigeons strutting across the concrete, weaving through the feet of travellers and hopping out of the way of rolling luggage. They picked at minute scraps of bread that were undetectable to human senses. Most had blackened feet and were missing toes and legs. In that moment I wished I had a loaf of bread.
The platform was finally listed for my train and I hurried to board. Thirty minutes later I was in Windsor and ten minutes later I was in a car with my friend and her children heading through the town and surrounding countryside. She took me on a tour of her old haunts and new. We passed vast open lands belonging to the crown, small row houses, posh shops, and large gated estates. We passed by Elton John’s mansion, Woodside, and we drove up to the gates to the Duke of York’s land. Then we drove into Windsor and past the castle. A true road side attraction, it sits right on the main street. It’s an imposing edifice but beautiful and nearly one thousand years old. Thinking about it, it’s difficult to believe that humans have been around for that long and that we used to build things like Windsor Castle. 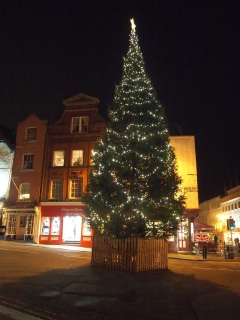 She parked in a garage and we all strolled around the shops. I began to relax. Windsor felt like home for some reason. It seemed familiar for some reason though I’ve never been there before. We went to Hardy’s, an old fashioned sweet shop that had shelves of candies behind the counter in glass jars. We walked through the train station with its quaint short track. Before I knew it, we were walking past the castle. I couldn’t seem to take my eyes off of it.
“You know, it’s almost time for Evensong at the chapel,” she said.
Immediately I wanted nothing more than go to St. George’s to hear the choir. The kids were beginning to reach their limits, but we didn’t see the harm in inquiring about attending. We approached the gateway and were greeted by two armed police officers who smiled and encouraged us to attend. We went it.
First of all, the chapel is not like what you may be imagining. It isn’t a chapel so much as a miniature cathedral. Gorgeous carved stone which echoed with our every step no matter how quiet we were, ornately carved wood throughout the choir stalls, and the ambience that only a thousand years of existence can bring.
The choir entered. It was only the men. The boys had been given the evening off as they had had a concert the night before. The cantor began in that clear, pure tenor that only the English can produce. When the choir came in in brilliant four part harmony my eyes welled up with tears. It was one of the most beautiful sounds I have heard and I’ve heard more than my fair share of choirs. As they continued I had to fight to hold back tears. The sound swirled around me and seemed to envelop me until I felt that I wrapped up in a blanket or being embraced by the dearest of friends. How I missed singing in a choir. Directing a choir is just not the same as singing in one. I missed the healing that came from singing. I missed feeling a part of something. You cannot be lonely when you are singing with other human beings. There is a powerful bond that comes from heartbeats aligning and perfect, harmonious synergy.
The service concluded and I felt bare and empty without the voices. We left the chapel and choking back tears, I thanked my friend.
I spent the next few days in a real home. I hadn’t been in a home for close to three months and I found myself breathing more deeply and sleeping more soundly than I had since I first arrived in England. There is a tremendous feeling of support and belonging when you are in a place like that and I began finally to heal. The panic attacks subsided and I found myself getting used to a family routine again.
On my first night we ate at the Hind’s Head Inn, a place frequented by Her Majesty The Queen on occasion when entertaining important dignitaries. It’s pub fare with a bit of a twist toward the fancy. I ordered an experimental dish called Sand and Sea which arrived in a crock looking very much like the shore. The sand was bread crumbs, the sea was…you know I can’t even remember, and the seaweed in between was kale. Essentially though it was a fish pie and it was delicious and incredibly fishy. The mulled white wine was also amazing and the cinnamon burned my throat as it went down in a completely satisfying way.
The second day I was there, the entire family piled into the car and headed to the Shepperton Studios in Watford for the Harry Potter Studio Tour. It would take pages and pages to describe all of the fascinating things there. The sets, the props, the models, the costumes, the animatronics, the vehicles, the paintings, the EVERYTHING! Before we began our tour one of the staff members said the longest anyone has spent there was twelve hours. It is very possible to spend hours and hours exploring especially if you add the audio tour as we did.

I was happily exploring everything and nearing the end when we rounded a corner and entered a black room, a huge black room. Dark except for blue spotlights from the ceiling. Empty except for one of the most amazing sites. Hogwarts. The scale model (1:24 in case you are interested) of Hogwarts. It filled the space. It was truly a magical site. I actually gasped when I saw it and my friend smiled at me. 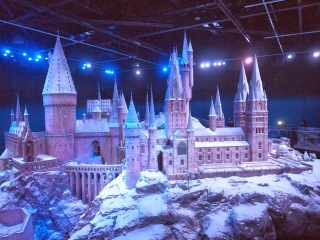 “We didn’t want to tell you about this. We wanted it to be a surprise,” she explained.
It was an awesome surprise. The very best surprise. The details alone could make you insane with how painstaking a process the design and build had been. A wide ramp way led all around it, giving a panoramic view of everything. Why would you ever CGI when you could have the artistry of the model maker?
My last day in Windsor was a lazy, relaxing day. We had originally planned to go to the castle but we all found ourselves exhausted. Instead we wandered about the shops in Windsor and my friend treated me to a new haircut. We had drinks at one of their neighbour’s houses that evening and when I returned to my most comfortable bedroom, I wept for not wanting to leave the next morning. I realised I was beginning to heal very slowly, that the blackness was beginning to lift. It was going to be a long healing process but three days in Windsor was where it began.