December 12, 2013June 8, 2017
For two weeks my essay for Principles and Practice had been hanging over my head. Not in the expectant mistletoe type of hanging; more as in the ton of bricks sense. Three failed attempts had left me nowhere and as the deadline loomed, I began to sink further and further into denial. Watching episodes of QI and The Thick of It while a proven necessity for my sanity were not helping me finish my work. I had planned to travel to Edinburgh for the Christmas Market on the Sunday before the end of term. I decided to make that both my deadline and incentive. Like Cinderella’s wicked stepmother I told myself that if I could finish my essay by 10:00am on Sunday morning, I could go to the market. I stayed up into the wee small hours of Sunday morning crafting and honing the best paper I could. At one in the morning I couldn’t hold it together any longer. I admitted failure and consoled myself by thinking that the market would be dull, and boring, and completely….completely wonderful. I popped on an episode of QIand sank into a deep sleep.
The next morning I awoke to a revelation. I could simply change my train tickets from this Sunday to next Sunday. Take that Wicked Stepmother! Cinderella just rescheduled the ball! I continued working until 10:00 am when, by some miracle I finished my paper. I had already changed my train tickets, but I knew that Durham was holding the final day of its Christmas Market. I dressed, grabbed my camera and my wallet, and began the walk into town. Little did I know that it would turn out to be one of the more musical journeys I have known.
Buskers are a normal part of life in Durham. I have gotten to recognise quite a few of them now through my many trips into town. There is the folksy, indie girl who usually parks herself near Cotswolds and strums her guitar belting loudly. Then there is her male counterpart who is usually somewhere nearby singing much of the same material. Once I saw a French horn player on Elvet Bridge, he was quite good and I thoroughly enjoyed his playing. Perhaps my favourite of the crew though is Bagpipe Guy. I haven’t seen him very recently though the cooler weather makes wearing a kilt decidedly uncomfortable. He often stands on the Framwellgate Bridge piping away. When a group of us traveled into Newcastle to celebrate my birthday we actually all saw him there as well in Eldon Square. Clearly busking can get you places. The Christmas Market had brought out buskers of varying degrees of talent and tenacity.
As I neared Market Square the streets became more congested. Though many of the store fronts were dark, people were contentedly window shopping, stopping for coffee, and chatting as they walked through the streets of town at Christmas. The distant sounds of brass music pricked my ears and I hoped that it was my French horn player. Sadly, however, it was not. The sounds of a brass quintet filtered over the cobblestones of Market Square. The trumpet was playing quite flat and an attempt at It Came Upon the Midnight Clear resulted in hopeless bleating as I finally entered the Square.
It wasn’t nearly as grand or crowded as I thought it would be, though I had arrived on the last day at 10:45 in the morning. A number of tents dotted the square along with a carousel and a few beverage stands. I began slowly walking past each stall trying to take in all of the sights and smells, while simultaneously trying to drown out the sound of brass. There was the charity stall which was asking for donations for soldiers, three or four vintage stalls with clothing that would make Macklemore proud, the truly-awful-Christmas-jumper stall had a wide selection of… truly awful Christmas jumpers, there was a fudge stall, soap stall, trinket stall, Christmas stall, three or four jam stalls, and finally the most wonderful stall of them all: the homemade ginger wine stall. Rows of plastic cups lined the table with samples which no man or beast could resist. I took up one of the cups and was met with a light, melodious flavour which danced about my tongue until I had secured three bottles to take back with me. 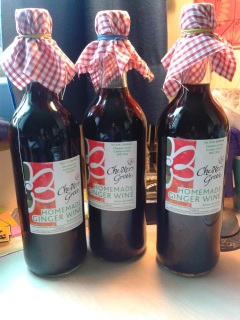 I stopped by a bench to readjust my newly acquired goods before I headed into Market Hall. It was business as usual inside. Some of the stalls were covered by large cloths. I passed the butcher, the fish guy, the cheese guy, the tailors, the medieval reenactors’ stall (yes, they have one), the pet food stall, and the cushion stall, before deciding to head up to Palace Green.
The brass music died away as I headed up North Bailey. I passed a number of older people dressed as a Dickensian choir and felt the need to stop and be inspired by such a prototypical seasonal display. Then they began singing.

I moved on rather quickly, climbing ever upward toward the Cathedral. I’ll tell you one thing, if Durham had been on the way to Mordor, the fellowship would never have made it past these hills. Just at the junction of Owensgate and North Bailey, I heard more music. This time it was much different…it was jazzy and it was really good. His guitar case lay open at his feet and the obligatory sign of the busker rested on the lid: Christmas CDs for sale.
I carried on up to Palace Green. The Cathedral was becoming a familiar sight, but it still hadn’t lost any of its grandeur in the two and a half months I had been in Durham. A large white marquee filled most of the green. Inside were the stalls of local craftsmen and artists, but entry was £3.50, an exorbitant fee for a starving student who had just bought three bottles of ginger wine. (Alright, I do see the hypocrisy, let’s move on.) Food vans and a roasted chestnut cart lined the outside of the green. People were milling about laden down with bags of goods they would be taking home at the end of the day. As I turned to walk to the Cathedral a choir of students began singing. They would be my last musical performance of the day and I’m glad to have closed with them.

As I rounded the far end of the green I noticed a sign which read “animal tent this way” with an arrow pointing around the corner. I headed over and saw the most beautiful cream coloured owl perched on top of a sign advertising pictures with a bird of prey for £2. I gazed at the creature which seemed unphased and rather unimpressed with the crowd gathered around it. Owls are striking to look at. It’s no wonder everyone is owl mad these days. They are quite amazing. I decided to move away from the front of the crowd to give someone else a chance at a photo and headed to the next tent which housed, to my utter delight, two reindeer, a male and female. He had already shed his antlers and seemed to be rather displeased with his food as he stood toward the back of the tent nosing it grumpily. She stood facing outwards with large, watery eyes. I had wanted to see reindeer for three Christmases but opportunities are scarce back home. I must have looked simple to anyone who was observing because I grinned like an idiot and snapped several photos. The reindeer and owls were the highlight of my day. Correction: The reindeer and owls were the highlight of my week. Seeing them had melted away all of the anxiety and depression that had boiled over during the past two weeks. I was myself again. 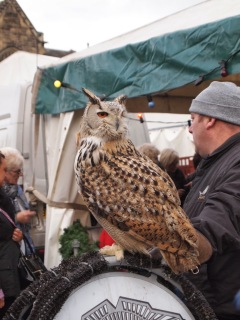 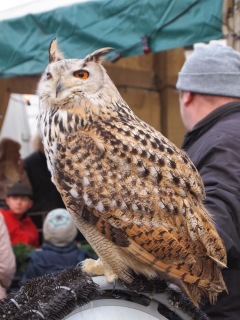 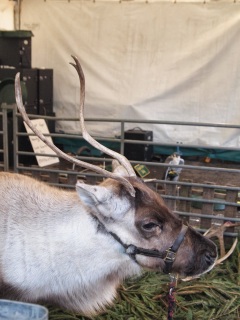 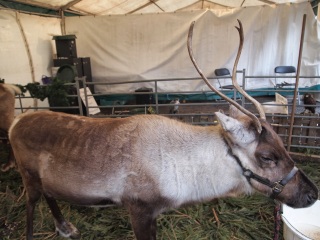