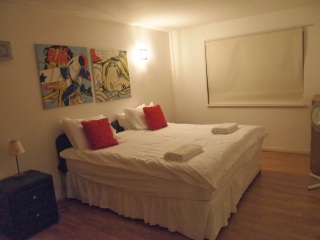 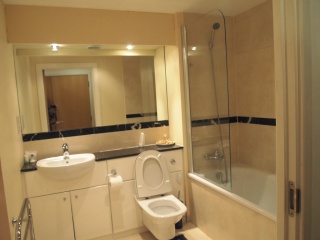 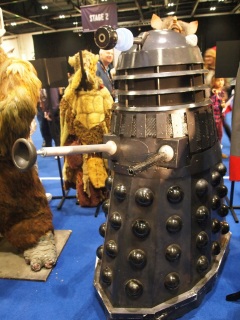 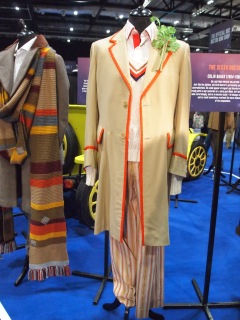 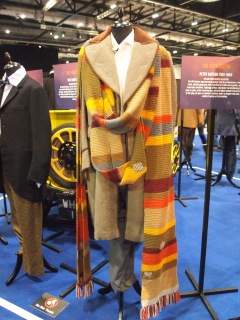 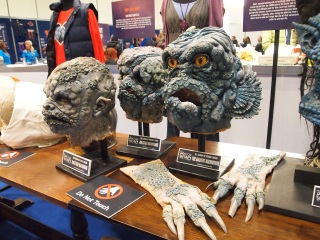 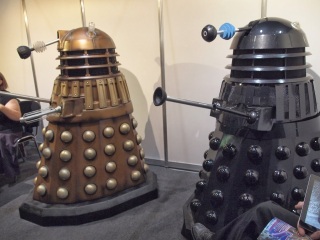 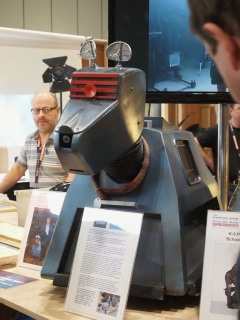 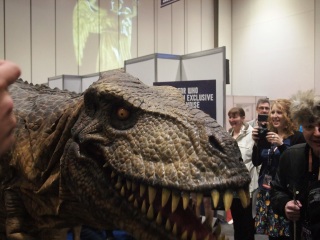 I was feeling much calmer and more able to make clear headed decisions. It’s always overwhelming when you first arrive at a convention. You have to get your bearings and you have to figure out what your goals for the day are. Goals. I decided to wander over to the autograph area to see if by some remarkable chance that I would be able to meet Tom Baker. I found a woman with a clipboard. Clipboards always denote some sort of authority. I asked about the possibility. She smiled and flipped over a few pages.
“Oh no I’m sorry. There aren’t any left with Tom Baker,” she said. My face fell. I glanced down at the page and saw that indeed, all of the Doctors were sold out, just as they had been online. I thanked her and wandered away trying to figure out what to do now.
I found myself amongst the vendors’ stalls and began looking at all of the different items for purchase. I decided I would mark out in my head the things I wanted to buy for myself and for presents. I felt my phone vibrating in my pocket. I had set alarms to remind me when to queue for my shows. It was time. There were two panel shows back to back that I would be seeing first, Regenerations and The Eleventh Hour. After waiting for thirty minutes, they began letting people into the theatre fifty or so at a time.
I got a fairly good seat towards front and in the centre. As we waited for the auditorium to fill up, scenes from the past fifty years of Doctor Who flashed up on the huge screen in front of us. William Hartnell, Patrick Troughton, Jon Pertwee, Tom Baker, Peter Davison, Colin Baker, Sylvester McCoy, Paul McGann, Christopher Eccleston, David Tennant, and Matt Smith. There were cheers for favourite Doctors but only David Tennant and Matt Smith got any recognition. I felt for the first time that day a regeneration gap. I was upset that no one was cheering for any of the other Doctors, my Doctors. I had grown up with replays of Tom Baker, Peter Davison, Colin Baker, and Sylvester McCoy. My Who was marked by wobbly sets, cardboard monsters held together by cello tape, and CGI done on the equivalent of a Commodore 64. My Who will had the feel of a group of friends getting together to film something purely for fun. That’s my Who. That will always be my Who.
Regenerations began and I was relieved when they began introducing a panel of my Doctors. I instantly felt more at home. Tom Baker, cane in hand, slowly hobbled over to one of the red sofas and sat on the arm. There he was. My Doctor. My Doctor. I smiled and the second vivid memory of the day welled up inside me.
My grandmother had come to visit for week. I was maybe eight or nine and I was home sick from school. She had made me some chicken noodle soup which I was weakly spooning into my mouth.
“Is there anything you’d like to watch?” she asked.
I nodded.
“Can I watch Doctor Who?” We had been taping them as they aired so we could enjoy them anytime we wanted.
My grandmother smiled.
“Doctor Who, eh?” she said, “Which one do you want?”
“Any of the Tom Baker ones,” I instantly replied.
She pulled of the first tape and put it in the VCR. Together we watched Jon Pertwee regenerate into Tom Baker. We watched him outsmart the giant Robot and the think tank that threatened the world with a nuclear holocaust. Then the next episode. Sarah, Harry, and the Doctor fought of the Wirrin invasion of earth. Then the Sontaran Experiment. We watched Doctor Who all day. It was the best medicine for a flu.
Peter Davison entered next, followed by Colin Baker and Sylvester McCoy. They spoke about their eras as the Doctor. Scenes from their respective regenerations played over the large screen and they talked about handing the role onward. I have watched many interviews with actors that have played the role of Doctor Who. They speak about the last day of filming when it was time to hand over to the next Doctor. They always speak with such sadness. It is masked sometimes by gentle jibes aimed at their successor or by reassurances that they were going on to other things, but there is always a great sadness that comes through. Something struck me hard and out of the blue. I am one of those past Doctors, watching the next generation of fans claim the show and make it their own. And it is with great sadness that I watch from the side lines of the now massive fan culture the absolute joy a glimpse of Matt Smith or David Tennant can bring. I understand that excitement and I am so glad that a whole new generation of fans has discovered the show that I grew up watching. Yet, I cannot feel a full participant. It is not spite, it is not envy, it’s nostalgia. That’s what I kept feeling, nostalgia. It’s quite a complex emotion really. People often speak fondly of nostalgia, recounting with such pleasantness the quaintness of the past. Nostalgia has a second face though, one that reminds us that we are linear beings. As much as we may wish to turn back the clock, to relive the past, we are forced into an onward march through time. The Doctor really is lucky to be able to travel to the past and relive it. I wish I were so lucky. I wish I could go back to my childhood and relive the days of Classic Who when the fans screamed for Tom Baker or Jon Pertwee. 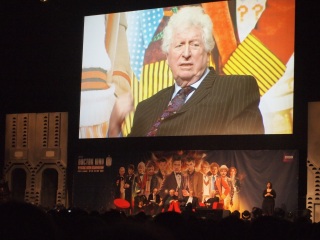 I was sad when the panel was over and I watched the Doctors leave. I had remembered something while I watched and listened to them. I have always thought of Tom Baker as my one and only Doctor, but the truth is, all four of them were my Doctors. Memories of watching each of them flooded my mind and despite the disdain so many fans have for Colin Baker and Sylvester McCoy, as a kid I really loved watching them, too. Then there is Peter Davison. If I hadn’t first seen Tom Baker, I think for sure Peter Davison would be my absolute favourite. I probably watched more of his episodes as a kid than anyone else’s. The way he speaks of the show past and present is so positive as well. I now felt even more regret that I wouldn’t be able to meet any of them. My Doctors. I would thank them a million times over for the joy they brought me as a child.
The Eleventh Hour was the next panel this time with Matt Smith, Jenna Coleman, and Stephen Moffatt. It was clear that the crowd was really excited for this show and they screamed as each entered in succession. I enjoyed the discussion and, as a fan of Stephen Moffatt in general, I was especially interested in glimpses into his creative process. Most of the questions were aimed at Matt Smith, and really it’s understandable. He’s the Doctor now, after all. As he spoke he constantly adjusted his socks. Then he said something that struck me.
“I think those of us in our thirties really got robbed of Doctor Who. It was cancelled just as we were coming of age.”
This was so true. I was lucky in that NJN showed replays and we had taped many of the episodes, but for the majority of my childhood, there were no new episodes being made. I had eventually grown out of watching the series, especially after Jimmy moved out and took all of the tapes with him to his new apartment. I wondered what it would have been like if I had had Doctor Who all through growing up. How marvelous would that have been? 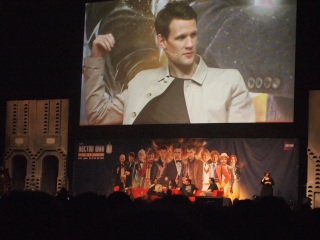 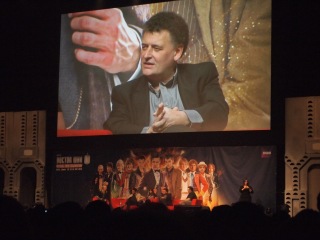