October 26, 2013June 8, 2017
Durham in October is wet and chilly. Some of the leaves have turned and fallen, but most of the trees are still fairly green. The leaves that have fallen get trampled into the pavement and when they are wet they form this brown, slippery paste-like substance. The weather is so changeable. You may be walking to your first lecture in a downpour but when you get out two hours later the sky is blue and the air is chilly. Then as you walk you warm up and by the time you make it to your next destination, you are overheated.
There is a considerable lack of pumpkin things here as well. Not necessarily Halloween décor, I’ve seen quite a bit of that around actually. No, it’s the lack of pumpkin EVERYTHING; pumpkin coffee, pumpkin bread, pumpkin pie, pumpkin butter, pumpkin soup, pumpkin scones, pumpkin muffins, pumpkin doughnuts, pumpkin puree. There is however a haven of pumpkin flavored things and that is the Starbucks just across the Framwellgate Bridge. Here you can still order a pumpkin latte and have a slice of pumpkin bread.
I did see a sign in Greggs as well advertising a Spicy Pumpkin Soup, but I haven’t yet had the chance to try it. Tesco does have pumpkins for carving and Halloween candy can be found there as well as at Poundland.
There is a lot of talk about Halloween and Halloween costumes. Though it isn’t as celebrated here as back home, there is a decided acknowledgement of Halloween. Houses aren’t decorated and only small children go trick or treating, but Halloween parties can be found everywhere as well as ghost walks and tours of supposedly haunted houses. The one thing they don’t have here are hayrides. I mentioned to Charlotte a few weeks ago that a friend of mine was going on a haunted hayride.
“What’s that?” she asked with a perplexed look on her face.
“You know, it’s a hayride where people jump out at you and try to scare you?” I replied.
She still looked confused.
“So farmers will hitch up a large wagon to their tractors, throw a few bales of hay on it for people to sit, and they drive around their farms. Sometimes they are at night and people dress up to scare you. It’s really a lot of fun,” I explained.
“That sounds like fun. We don’t have anything like that here,” said Charlotte disappointedly.
Durham does, however, have some pretty creepy cemeteries. I managed to go out one morning when the fog was thick and snap a few photos. I present to you now, the Cemeteries of Durham. Muwahahahaha ::cough cough:: Oh, sorry about that.
St. Cuthbert’s Church on North Road
I woke on the morning of the 16 October and noticed the view outside my window had been obscured by a thick fog. I was still living north of the city of Durham and I knew my walk that morning would take me past St. Cuthbert’s and its churchyard. I made sure I had my phone on me and I left early enough to be able to wander about for a few minutes taking photos. The graves were silhouettes against a white backdrop of enigmatic mist. Some were quite old and covered in moss. In order to enter the churchyard, you pass through a wooden archway with the names of those you had been killed in both World Wars listed on the inside. It’s quiet and still. 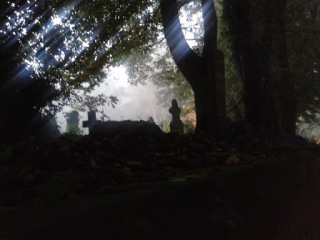 St. Oswald’s Church on Church Street
As I made my way through town, the fog had began to lift, like a veil rising and revealing a colorful display of reds, golds, and greens. I came upon St. Oswald’s, my favorite churchyard. It’s home to a wildlife refuge as well as the long dead. Indeed, as I passed the old, cracked headstones I was reminded of the quote from the Book of Common Prayer, “in the midst of life we are in death.”
No we aren’t, I thought, in the midst of death we are in life. The wildflowers that grow over the graves, the birds, and the small animals are all vibrant and alive among the dead. The churchyard feels anything but a dead place, it’s warm and pleasant. It is by a busy thoroughfare and people are always walking by the stone wall that encapsulates it. When you are in the cemetery though, it still feels isolated and quiet, as though the outside world is shut out of its boundaries. 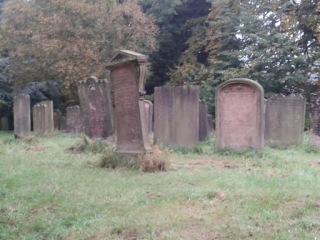 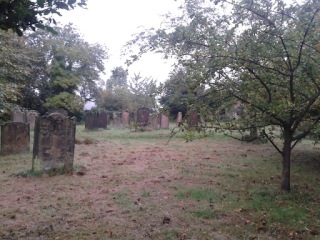 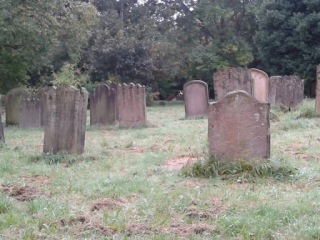 Durham Cathedral at Palace Green
I went the Cathedral at night. It is brilliantly lit by flood lights and can be seen from almost every point in Durham, like a beacon. The Cathedral is a veritable tomb itself, housing the remains of St. Cuthbert and St. Bede. It’s quite a small cemetery and an odd one. Palace Green is often alive with activity. Students are running to and from class. At night, they shout drunkenly when walking back to their digs from the Castle pub. The graves seem quite exposed and out in the open, not kept tucked away behind stone walls. 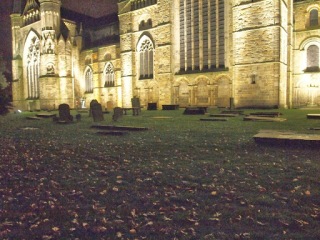 There are certainly other graveyards in Durham, but these are the ones I interact with on an, if not daily basis, than certainly weekly. I frequently walk past St. Cuthbert’s on my way to town, and I often look in as I do. There is something compelling about the worn stones that I do find comforting. Every headstone is a life, a story. I have often wandered through old cemeteries wishing I could unlock the mystery of those stories. Who were these people? Who did they love? What kind of disappointments did they experience? What were their fears and triumphs? What did they care about? I weave through the monuments and imagine these long past lives and create elaborate stories to go with them. I suppose that’s why I’ve never been afraid of churchyards. To me every one is like a heavy tome filled with intriguing tales and characters.