October 6, 2013June 8, 2017
26 September 2013
I woke early. The sun streamed into my window and brightened the entire room. The sun, I hadn’t really seen it since I left the US. The sky was a beautiful light blue and white fluffy clouds rolled lazily by. It was a good morning.
My To Do List flooded my mind. I needed to get the internet fixed. I needed the university to verify my passport. I needed a mobile phone and I needed a bank account. I needed to exchange money. I needed to find the archaeology building. I needed breakfast. There was also a walking tour of Durham which left from Howlands Farm and I thought if I could make it, it might be a nice introduction to the city.
I slowly, exhaustedly rose from my bed and went to take a shower. Now as any human in Western civilization knows, the hardest part of living somewhere new is figuring out how the shower works. It took me a good five minutes to produce hot water out of the shower head. Some of my tension began to melt away as I stood allowing the water to rush over me. I dressed, brushed my teeth, and crept into the kitchen. I was terrified of waking my flatmates. It was still very early in the morning. I silently made a bagel with cream cheese and wolfed it down.
Back in my room I began packing up my large, red laptop bag. I put my laptop and power cord in, then my red binder of important documents. I packed up my camera in case I wanted to take pictures. I packed some pens, my notebook, and my archaeology binder. My bag must have weighed close to ten pounds when I had finished jamming things into it. I set off.
I decided I wanted to walk. The bus was £2 to ride all day, but I still didn’t have any English money. The walk was long and by the time I reached town I felt the full weight of my bag. My back rebelled against the burden I had set for it. I can’t remember having pain like that before. I entered Market Square and everything was still shut and I realized I wouldn’t be able to exchange my money. I went to an ATM and decided that the fee was a small price to pay for having the correct currency.
Market Square in the daylight was just as magical as at night. There were several vans parked in the square dropping off deliveries. A few people were wandering around. The early sunlight created a pink haze around everything. It was beautiful. 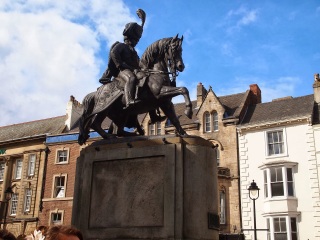 Off I went to the Palatine Center. If I couldn’t get my computer fixed then I could head down to Howlands Farm and perhaps pick up my bank letters and then I’d have everything I needed to open an account. 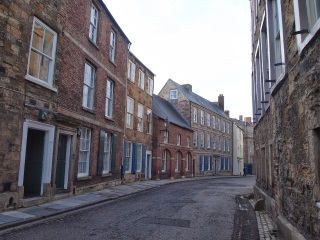 I wandered out of Market Square and down a narrow side street that I thought might take me south. I had grabbed a map out of my welcome pack and was using it to navigate the city. The buildings were so close together and each was so different from the next. It reminded me of Diagon Alley from Harry Potter. All of a sudden the Cathedral loomed up upon me. I looked at my American cellphone and saw that I had plenty of time to wander before they would take the first appointment. I turned onto Palace Green and stopped dead in my tracks. 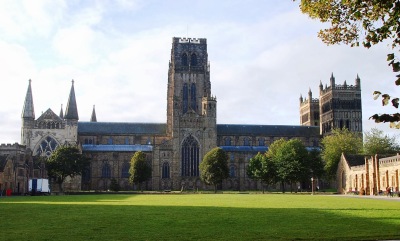 I had graduated in a grand cathedral seven years ago, but the sight that met my eyes that morning assured me I had seen nothing as grand and imposing as Durham Cathedral. Perhaps it was also the knowledge of just how old it was; nearly a thousand years old. A thousand years old. There was nothing back in the US I could think of to compare it with. I had to go in. Enormous vaulted ceilings, rounded arch ways, carved rounded columns, the ornately carved fount, and the organ. Oh the organ! It was truly incredible. The stonework echoed with my footsteps and I tried desperately to be silent. I am by no means a religious person, but the Cathedral was awesome; awesome in the true meaning of the word.
As I wandered back out, I looked across the Palace Green and saw the Castle. I couldn’t believe where I was. I had seen all of this in pictures so many times but now I was standing here. I began to feel better. More optimistic. More settled. 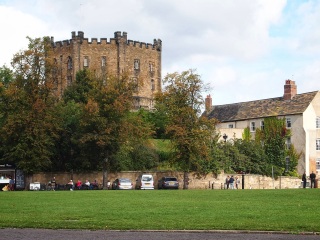 By the time I made it to the Palatine Center it was nearly nine forty. I could grab the ten o’clock appointment and have internet access by eleven. I went into the IT department again and asked for the earliest they had. Someone had just grabbed the ten o’clock so I took the appointment for twenty past. That gave me nearly forty minutes with which to do…..what? I knew the archaeology building was very close by; perhaps I could go and find that.
I set out of the Palatine Center and wandered onto the Science Site. I was so glad my lectures would be here. While I have never claimed to have a scientific brain, I admire scientists greatly. They have the power to unlock the mysteries of the universe or the mysteries of the human mind. Perhaps the one is the key to the other.
The first building I came across was the Dawson Building where the Archaeology Department was housed. No harm in maybe finding the postgraduate secretary and introducing myself, I thought. I wanted to get my bearings as well so I would know where to go on Monday for induction. A long white hall greeted me with framed photographs of different native peoples and places. I came to a red staircase and a sign pointed me to the second level. Up I went. There was a set of glass doors in the left corner and I went through them. I wandered the hallways looking at the postings, feeling suddenly at home. I was where I was supposed to be. This was my place.

He was a fantastic guide. We wandered through the city stopping at certain points to hear some historic facts and to take pictures. Charlotte, Trish, and I talked almost the entire time. Then we heard another girl to the right of us mention the Archaeology Department. This turned out to be extremely fortuitous. She was Sophie from Cornwall and not only was she in the Archaeology Department with the three of us, she was in my program. She was a fantastic addition to our motley crew. She quickly apologized in advance if she ever called us “bird.”
“It’s a Cornish thing,” she explained. “We call everyone bird down there.”
I don’t think I will ever know why we all decided to go on the walking tour that day or how we ended up on the same tour together since they had split the larger group into two. I don’t believe in fate. Perhaps it was simply the most enormous coincidence of them all. The four of us would become the fastest friends. After the tour we went on to have a late lunch together at a fish and chip shop in town. Then we went to the mobile phone shop and my new friends helped me and Trish pick out English mobile phones. They were the first ones I put into my contact list.
The rest of the week would be spent together and our little group kept growing. We met two more Sophies that night at the President’s Reception back at Howlands. We also met Jess from New Zealand, Elena from Italy, Ingrid from Norway, Sam from all over, and so many more. For some odd reason we continued to meet people from the Archeology Department. Archaeologists were everywhere! I can’t begin to tell you, reader, how happy I am I plucked up the courage to talk to Charlotte that day. I can’t tell you how glad I am I made it to that walking tour.

One thought on “Freshers Week Recap (Part the Second)”